In the midst of the Sonoran Desert, a group of Arizona State University engineering students gather every Monday night after classes to untangle wires, size down battery pods with a metal file and program a sensor system for an autonomous underwater robot that they designed and 3D printed.

They’re building a self-driving submarine for an international competition in July 2019, prototyping technology that can be used to detect underwater bombs, discover new deep-sea life, survey underwater wreckage and check the bottom of boats for fissures.

This ASU Polytechnic campus student organization is an all-female team called Desert WAVE (Women in Autonomous Vehicle Engineering), and their mentors believe that WAVE is only the second all-female underwater robotics team in the world (the first is at Texas A&M).

One of the 10 members of the team, which formed in fall 2018, is mechanical systems freshman Maria Espinoza. The U.S. Navy veteran was an avionics electronics technician stationed in Hawaii who worked on submarine hunters during her service.

She has years of experience working with electrical drawings, schematics and hardware — but she also has experience with what it can be like working in a male-dominated field.

“I understood how it was to be in the background,” she said. “You could just tell that when someone asked for help or needed advice, they always looked for the male perspective.” 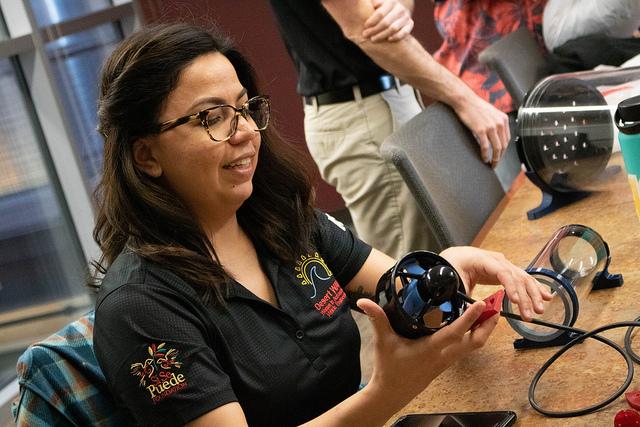 Espinoza enjoys being on the Desert WAVE team because everyone is new and learning things together; it’s not as intimidating as other engineering environments.

“We can’t really hide behind someone else if we get intimidated,” Espinoza said. “We don’t want to be wrong. Here, if we’re wrong, we’re OK because we’re all learning together. I think it’s going to help us become more confident.”

In fact, opening the doors to more diversity in engineering was a big part of the origins of the team, which was launched by a partnership between ASU and the Si Se Puede Foundation. The Si Se Puede Foundation provides programs that strengthen communities, families and children. They do this largely through robotics clubs throughout the community.

The foundation primarily serves low-income, predominantly minority communities in Chandler, Phoenix and the surrounding areas. In addition to supporting the WAVE team, the partnership is also making possible the National Underwater Robotics Challenge on June 28–30, an open competition for kids and adults alike to compete at the pool at the ASU Polytechnic campus. The Si Se Puede Foundation is also part of the ASU Latino Partnership Scholars, which awards scholarships to deserving ASU students and prioritizes students studying STEM fields (applications are open now and due Feb. 1).

WAVE team mentor Faridodin “Fredi” Lajvardi, who is the vice president of STEM (science, technology, engineering and math) initiatives for the Si Se Puede Foundation, has been working with young engineers for decades. 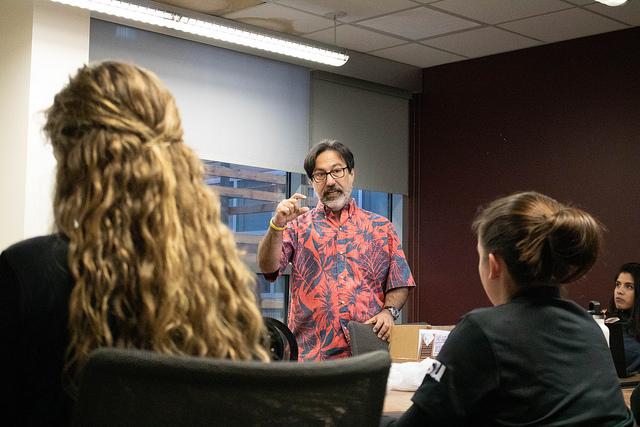 His experience throughout his career has been that if girls and women were given equitable opportunities, they excelled. But he also knew that those opportunities weren’t always there.

“I saw the statistics. I always knew as a male that they were bad. I just didn’t know how bad,” he said.

According to the Society of Women Engineers, more than 32 percent of women in STEM degree programs either switch majors or stop pursuing a degree, and only 13 percent of working engineers are women.

Many programs exist that encourage girls in secondary school to pursue STEM, but Lajvardi says that the drop-off in college and in the workforce is dramatic, and there are very few programs targeting women in college and on the job. The main reason cited for women switching majors or dropping out of the STEM workforce is the male-dominated culture.

“In my mind we had potentially great engineers — because you don’t know where that next great idea is going to come from — being shoved out,” he said. “We’re losing that opportunity to have extra people who could be contributing to our STEM workforce or our STEM knowledge base.”

The partnership between ASU and Si Se Puede led Lajvardi to collaborate with ASU engineering lecturer Daniel Frank, another mentor for the Desert WAVE team. They decided to start a program for women to enter international competition to build their skills, resume and resilience together.

Frank teaches an introductory engineering class at the Polytechnic campus and got to work right away recruiting women from his classes to join Desert WAVE.

“It gives them time to develop and grow so that hopefully … they’ll have the ability to navigate and hold their own in a male-dominated field,” Lajvardi said. “It’s an experiment.”

It’s an experiment that appears to be working. The team’s weekly meetings are a mix of designing parts to be printed and assembled, building the robot itself, figuring out electrical and software programming and talking through the stereotypes and bias that women sometimes experience in the field. 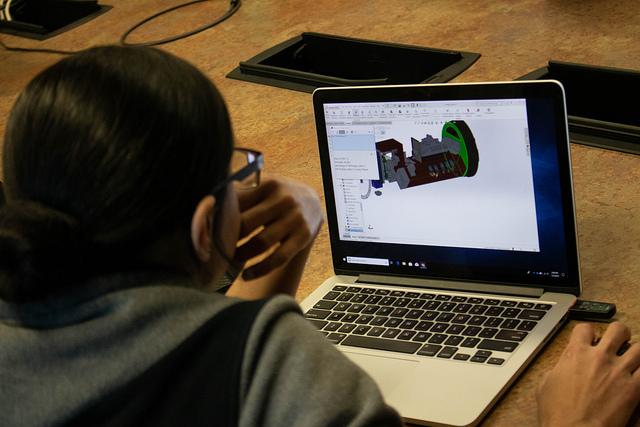 The team designs and produces many of their robot's parts with a 3D printer. Photo by Spencer Brown

Human systems engineering freshman Jessica Dirks spent her winter break CADing (computer-automated design) parts for the robot with Solidworks software. She said her practical engineering experience has grown significantly in her time on the team. But she knows what it’s like for her skills to be doubted.

“I’ve had experiences where people have said, 'I’m going to double check your numbers.' The reason he cited for doing that was because I was female,” said Dirks of a prior experience in a group project.

Still, Dirks knows what she can do, and she has been helping her little brother build projects with her new 3D printing skills.

Desert WAVE team president Whitney Foster, an engineering freshman, is excited to put those newly printed parts to work. She loves the tactile element of soldering, filing parts and putting the robot together, and she loved taking apart a sample robot to see how it worked and using it for design ideas.

“I like taking the part out of the printer. ... I like the hands-on part. I can’t wait to actually put it together,” she said.

Foster was inspired to be an engineer by her grandfather, who worked for Boeing. She hopes to work in mechanical systems engineering, maybe in the aircraft industry. In the meantime, she’s excited that she gets the chance to experiment with many different aspects of engineering with her team, including learning about electrical engineering and computer programming.

All the work of the Desert WAVE team is leading up to the RoboSub competition, which will be held July 29–Aug. 4 at the San Diego Naval Base. There, robots from 20 international collegiate teams will compete in a 16-foot deep testing pool that mimics being out in the open ocean. In that environment, the self-driving robots have 20 minutes to shoot torpedoes at targets, drive through gates, pick up and manipulate objects, follow acoustic sound indicators to find objects and more.

All the WAVE team members can’t wait to see how their robot performs at the team’s competitive debut, especially since it has to navigate everything based on its autonomous programming. But regardless of how they perform, they’ve learned a lot along the way.

Foster has glowing words for her teammates about their work leading up to the RoboSub competition, not as women but as engineers who are doing their jobs.

Top photo: The Desert WAVE team poses with a robot that Falcon Robotics donated for them to deconstruct and use as inspiration for their robot. Photo by Spencer Brown