The presidents of Arizona’s three state universities are hoping that the upcoming legislative session is when lawmakers will finally consider the “50/50” funding model they’ve been promoting for several years.

Michael Crow, president of Arizona State University, said the three public institutions have changed their operating models to become more entrepreneurial and efficient and that the state should commit to paying for half the cost of educating in-state students at ASU, Northern Arizona University and the University of Arizona.

“All three of us have moved to the position where we say, ‘We don’t need you to fund the university, we need you to fund students from Arizona,'" he said at a talk sponsored by the Greater Phoenix Chamber of Commerce at the Musical Instrument Museum in Phoenix on Friday morning.

External audits have proven that the three universities’ costs are among the lowest in the nation, Crow said, but state funding is less than $4,000 per in-state student — far below half the cost of attendance.

“It’s a simple model, and we can then tell you how many of those students graduate and our objective would be to graduate 90 percent of those or more,” he said.

Currently, there is no strategic funding model for public higher education in Arizona.

“The historical model that was in place for decades is gone,” he said. “The temporary model that lasted for a few nanoseconds on performance-based funding is gone.”

Rita Cheng, president of NAU, noted that the universities took on the unfunded mandate of Arizona’s Teachers Academy — a tuition-relief program in response to Gov. Doug Ducey’s call in 2017 to help ease the critical teacher shortage in the state. She said the 50/50 funding model would demonstrate a commitment among the state, the universities and Arizona’s families. 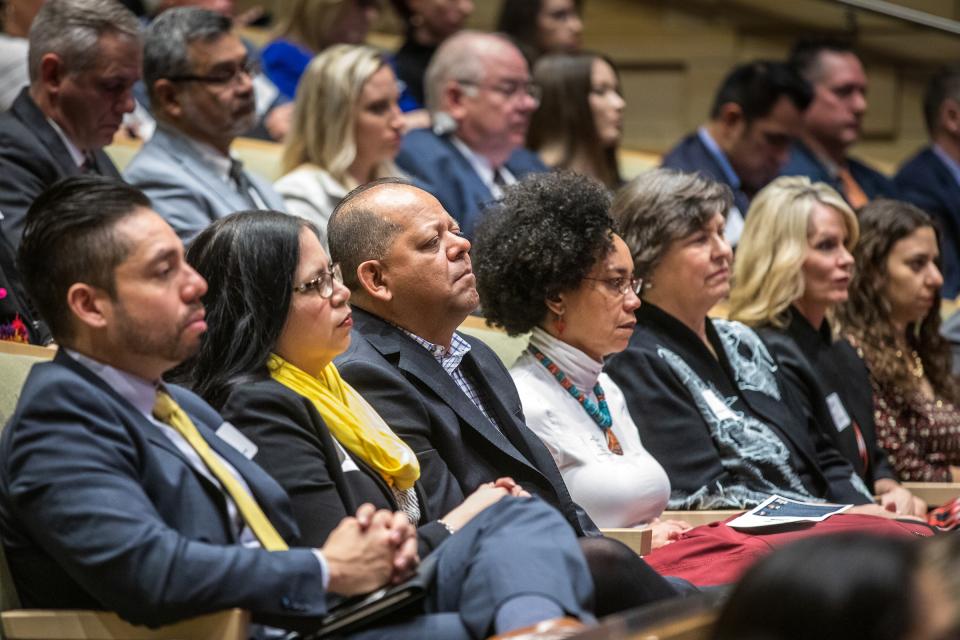 “Being near the bottom of outcomes for education doesn’t sound good and doesn’t feel good, and we should realize there is a solution to this if we work together,” she said.

Robert Robbins, president of the University of Arizona, said that research at the institutions operate at a loss.

“We have almost $750 million in research expenditures that run as a deficit operation. That’s not good business,” he said of his school. “It’s a disaster if you think of the long-term vitality of the workforce.”

Crow said that ASU has become more productive and efficient, noting that the university has 12 employees per 100 students, compared with 50 per 100 students at Ohio State University.

“We’re producing three times the number of graduates, at a higher quality, and doing five times the level of research we were doing and we doubled the four-year graduation rate,” he said.

“We’ve lowered the cost to the state to produce a degree by 75 percent per degree produced. We have not increased the average student debt in a measurable way,” he said.

Yet Arizona is underperforming when it comes to producing college graduates, with only 45 percent of the population with a postsecondary credential. The goal is to reach 60 percent by the year 2030.

Ron Shoopman, chairman of the Arizona Board of Regents, told the crowd at the “Valley Voices” event that although tuition increases over the last six years have been lower than inflation, graduation rates are still a problem.

“We face a problem with educational attainment in Arizona,” he said. “Our students progress to higher education at a rate 20 percent lower than the national average. That’s a problem.

“About half of our students enter a university someplace, but only 23 percent of them graduate. It’s a looming issue and one we have to solve.”

Robbins said the University of Arizona has been working on a new strategic plan to improve retention and graduation rates.

“One of the things we’ve been resolute in is we have not attained the success with our students we need to,” he said. “We want to change a culture that’s been fairly static for the last several years.”

Crow said that the culture in Arizona has allowed the universities to redesign themselves to be more productive and efficient. But he criticized the move by the state’s attorney general to try to stop ASU from generating revenue from land it owns. On Thursday, Attorney General Mark Brnovich sued the Arizona Board of Regents, which oversees the three universities. He believes it’s illegal to allow private companies to build on university-owned land and then pay ASU in lieu of taxes.

“It’s a strange moment in time,” Crow said of the lawsuit, because essentially, Brnovich, who represents the Board of Regents, is suing his own client. Crow said that ASU has the authority to create those real-estate partnerships to generate revenue.

“You want the people who are running a university to think very long term.”