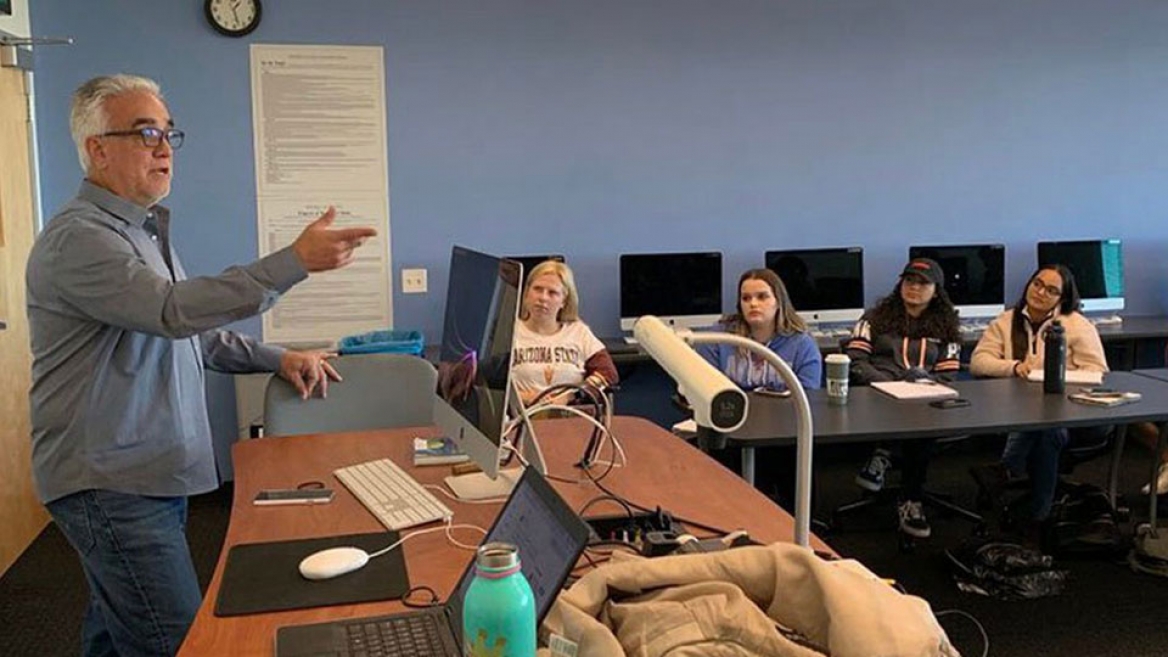 Pedro Gomez, an Arizona-based reporter for ESPN who was a frequent presence at the Walter Cronkite School of Journalism and Mass Communication, died unexpectedly Feb. 7 in his Valley home. He was 58 years old.

The Cronkite School and Gomez’s family established the Pedro Gomez Foundation Fund to honor his memory and continue his impact on sports journalism students.

“Not only was Pedro an incredible journalist, but he was an even better person,” said Brett Kurland, director of sports programs and the Phoenix Sports Bureau at the Cronkite School. “He was always so generous to everybody connected to Cronkite — our students, our alumni, our faculty. It wasn’t just class visits or speaking appearances or mentoring. He was the first to share advice and wisdom when he encountered a Cronkite student in a clubhouse, to welcome them in and show them the ropes, to give them a word of encouragement.

“I would obviously love nothing more than if this fund didn’t exist and instead see Pedro walk into one of our classrooms tomorrow,” Kurland continued. “He gave so much to Cronkite and its students. What an incredible honor that his family has chosen to establish this fund to carry his legacy forward at Cronkite, to continue his tremendous impact on the Cronkite community.”

“If we all live our lives the way Pedro Gomez led his life, we’re doing it right.”
— Brett Kurland, director of sports programs at the Cronkite School

Born shortly after his parents immigrated from Cuba, Gomez started his journalism career in Miami and made his way to The Arizona Republic in Phoenix before landing a job at ESPN in 2003.

“The fund, I would imagine, is exactly what Pedro would want,” said Paola Boivin, digital director of the Cronkite News Phoenix Sports Bureau and friend to Gomez. “He was always about helping others, whether they were journalists or just people that were underserved. People know him as such a great baseball mind, but I know him more for having a bigger heart.”

Boivin, who worked with Gomez at The Arizona Republic, said there was a time in her early career that she was being harassed in the Dodger Stadium visitors clubhouse. Former Dodgers pitcher Orel Hershiser gave her words of encouragement, affirming that she belonged in the clubhouse as much as anybody else. When Boivin was inducted into the Arizona Sports Hall of Fame, Gomez reached out to Hershiser to speak the same words of encouragement in her tribute.

“I’m crushed at what happened, but so grateful that the family is allowing his legacy to live on in this way,” said Boivin.

Boivin was amazed to see how many people were reacting online to the news, from 14-year-old high school students to the owners of major league baseball teams.

Gomez was a celebrated baseball journalist and left an impact on the many Cronkite School students who had the opportunity to meet him.

“When I think of Pedro, the first thing that comes to mind is his generosity and his humility,” said Marco Peralta, a student Gomez mentored. “The biggest compliment I have ever obtained is that a colleague mentioned to me that I reminded them of Pedro Gomez. I’m not at the level Pedro was in, and I don’t think I’ll ever be — but I hope to one day be like him and make him proud. I will carry his legacy everywhere I go.”

Make a gift to the Pedro Gomez Foundation Fund at the Cronkite School or contact Lindsay Walker, director of development, for more information at Lindsay.D.Walker@asu.edu or 602-496-5052.