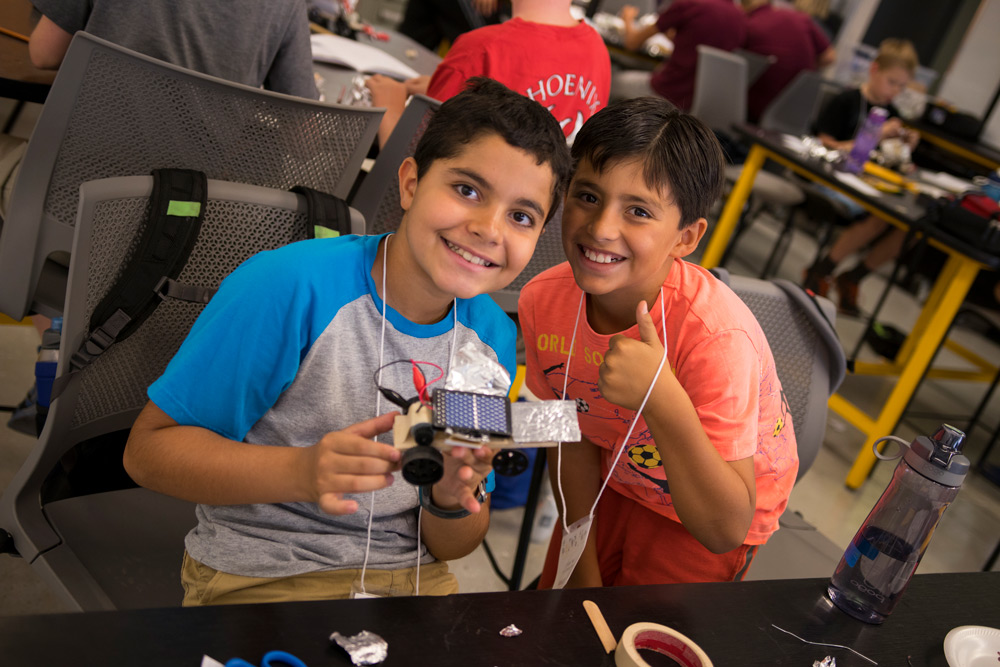 Summer is a great time for students to get out of the classroom and explore new things. For K-12 students who spend a week of their summer with Arizona State University’s Ira A. Fulton Schools of Engineering, that means exploring science and engineering fields and life on a college campus.

The Fulton Schools Summer Academy actively engages participants in hands-on STEM activities and empowers them to seek out other STEM opportunities beyond their summer experience at ASU.

“Fulton Schools Summer Academy provides a unique opportunity for students to come to campus and see themselves as an ASU student and explore a wide variety of camps, from robots to apps to solar energy to physics to coding,” said Hope Parker, associate director of engineering K-12 outreach. “It really gives them a chance to dive into something they’re interested in, whether they know a lot about it or not.”

In 2017, the program offered 18 total camps with 33 sections that vary from half-day camps to full-day camps to overnight camps.

These camps are split between sessions created and taught by Fulton Schools faculty, and camps created by Parker’s K-12 Engineering Education Department team and taught by Phoenix-area elementary, middle and high school teachers.

This year’s 33 Summer Academy camp sections were nearly full — some with wait lists — and attendance nearly doubled since last year. More than 850 students attended camp, up from 500 students in 2016.

“I think we’re starting to build a brand around our camps and our department,” Parker said. “A lot of people didn’t know we existed and now that we have all these programs and people have heard of us through various channels our camp attendance has grown.”

Bringing a diverse group of students together to learn

Inclusion and access are an important missions for the university, so Parker’s team strives to bring a wide range of students together at Summer Academy camps.

“There’s something to be said about having students from all different backgrounds learning from, working with and teaching each other,” Parker said.

One way they help bring in underrepresented students — including those from rural or low-income families as well as female and minority groups — is through scholarships. The Summer Academy gives back a third of its revenue to scholarships to help students be able to attend summer camps run by the K-12 Engineering Education team.

“We make a big push to ensure all students, regardless of their backgrounds and financial need, are able to come to camp,” Parker said.

One notable camp offered by the Summer Academy is the National Summer Transportation Institute (NSTI), a free, residential camp sponsored by the Federal Highway Authority Civil Rights Division and the Arizona Department of Transportation. As part of the week-long NSTI camps, aimed toward rural, first-generation and underrepresented student groups, high schoolers get an experience of being a student on campus as they live in a dorm at ASU’s Polytechnic campus and explore engineering disciplines with faculty and industry mentors.

“I think NSTI really does a lot for our community because it doesn’t allow cost to be an issue,” Parker said. “It really focuses on helping those students in 10th to 12th grade see what engineering really looks like.”

Jennifer Velez, NSTI coordinator, emphasizes the collaborative efforts to make this experience possible for these students.

“NSTI is one of those programs that is a truly collaborative effort,” Velez said. “The success relies on donations of not only funds, but also time and expertise from so many partners around the valley – all in an effort to bring meaningful learning experiences to Arizona high school students.”

Daniel Hood, an earth and space science teacher at Mesa High School and NSTI instructor, says the camp emphasizes meeting professionals at their workplaces, whether that’s at ASU, Mesa Gateway Airport or out on a civil engineering construction site — a unique opportunity for him and the students.

“It gives students a hands-on chance to meet professionals in the field who are doing the work currently,” Hood said. “These opportunities are sometimes tough to find on a classroom because you can only go on so many field trips in a year, and we take them on 10 or 11 in the course of a week.”

Parker’s team listens to what the community is asking for, what industry is asking for and looks at trends at the university level to provide new camps that fulfill those needs.

“We are the conduit between industry, community, faculty, and students, and we listen to everyone and come up with a menu of camps that meets the needs of each audience and implement them throughout the summer,” Parker said.

Based on community demand, in 2017 the Summer Academy added more coding camps, including an intermediate level camp for students who wanted to continue on after taking the beginner class the previous year, or who already had a coding background elsewhere.

Ira A. Fulton Schools of Engineering lecturer Christina Carrasquilla hosted her own faculty-run camp after noticing the nationwide push to get girls into STEM. Her App Camp for Girls was added in 2016 after she noticed the community need for more STEM opportunities for female students.

“The Fulton Schools Summer Academy is an essential piece of outreach that makes higher education in STEM accessible to our community,” Carrasquilla said. “At App Camp for Girls, we present STEM curriculum from all aspects in respect to app making including coding, design and user experience.”

For faculty, Fulton Schools Summer Academy camps are also a great opportunity to share the research they’re doing in their labs with the greater public, Parker said. Students come away with an interest or passion for that research topic and want to pursue it further, which is important for the vitality of the research and related academic programs.

“Fulton Schools students provide mentorship to the students both from the curriculum they’re learning in the camp, but they also talk to students about what it’s like to be a college student at ASU, and serve as a role model for younger students so they can see themselves here at ASU or college in general.”

Phoenix-area school district teachers are brought in to teach camps not run by Fulton Schools faculty.

“We focus on teachers who understand and embrace design thinking, project-based learning and the importance of critical thinking and exploration,” Parker said. “We have teachers who come back year after year because they love what they do and it’s a great way for them to spend their summers.”

These instructors believe STEM is an important part of a child’s education, and excel at teaching students basic engineering skills in a hands-on way.

“STEM is going to drive what’s going to happen in the rest of the world,” Hood said. “All the different science and technology and engineering sides they’re going to have to learn will soon be basic skills everyone has to know, so being on the forefront of that is important for them to hit at now.”

Hood and other instructors also believe the camps are good at teaching students other skills necessary for their academic and careers success.

“I think the important thing about kids going to camp is not only the technical piece, but the social piece, the soft skills and the ability to meet new people, work with groups, collaborate with your neighbor and help each other,” said Kathy Wooton, computer lab electives teacher at Skyline High School in Mesa, Arizona.

Wooton and Erik Von Burg, Gifted and Talented Department Specialist at Mesa Public Schools and instructor of the FIRST LEGO League Introduction for Girls camp and other FLL camps, believe even the technical skills translate beyond engineering, science and technology careers.

“This type of STEM education can serve anyone because even if you decide not to go into any STEM fields, the types of logic you’re applying, the thought process skills and the problem solving skills apply everywhere,” Von Burg said. “They’re universal in my book.”

Not only is the Fulton Schools Summer Academy a learning experience for students, instructors also believe they learn a lot at camp.

“These camps help me as much as they help the kids,” Wooton said. “It’s funny to me when a child says ‘Mrs. Wooton, why are you teaching us this the hard way?’ and I am very quick to say, ‘Well, why don’t you show me the easy way?’ Then they show me and everybody learns and we all have a good time.”

Registration for the 2018 Fulton Schools Summer Academy camps will open in February 2018.