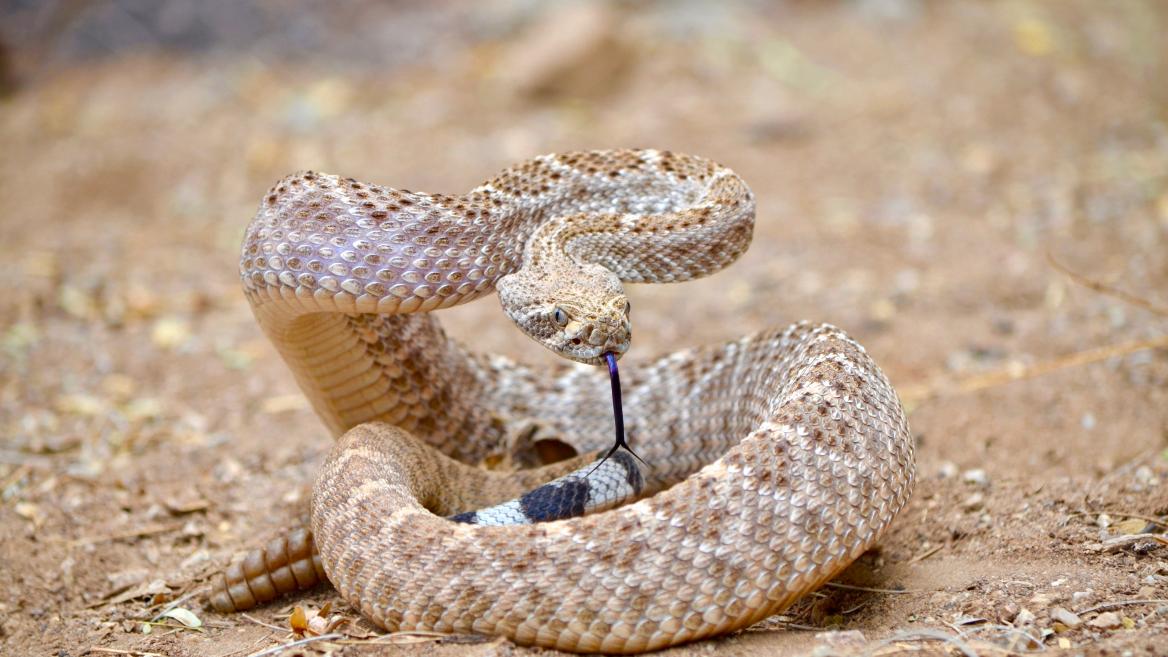 How to avoid getting bitten by a rattlesnake

The spring and early summer temperatures in Arizona are perfect for outdoor activities such as hiking, mountain biking and camping. And just as people flock to the outdoors to enjoy this time of year, so do snakes and other reptiles.

Arizona is well-known for having a diversity of snakes — as many as 35 to 40 species. Moreover, the state has the greatest diversity of rattlesnakes anywhere in the world — 19 different species. They do well in the desert because they can go a long time without eating.

So what can you do to make sure you don’t end up bitten by a rattlesnake?

“First, the best thing to do if you see a rattlesnake is to appreciate it. It’s part of our natural environment, and they serve an important role in that environment. They are not out to get you, so it’s actually a great experience,” said Dale DeNardo, associate professor with the Arizona State University School of Life Sciences.

“The next thing you want to do is keep your distance. They can only strike about a couple of feet at most, so if you see it, back away. Don’t try to scare it away. Just try to separate yourself from the encounter, so it’s best to create distance and usually, you can just go around the animal. It’s going to try to get away from you unless you trap it in a space,” he added.

DeNardo studies rattlesnakes and other reptiles, and he’s the university’s attending veterinarian. He said it’s important to understand how these animals cope with changes in their environment and with the availability of resources like water and energy. The snakes are critical to the health of a desert ecosystem.

Question: When people are spending time outdoors in Arizona, what are they likely to see?

Answer: There’s a good chance of seeing rattlesnakes at certain times of the year, and that’s during the spring when it’s warm enough the animals come out, but not too hot. When it gets too hot, they move to become nocturnal. Most commonly, you’ll see diamondback rattlesnakes.

The thing to remember is that they’re not out to get anybody. They want to be left alone. Most of the rattlesnakes that see you, you will not see. When people say, "Every one I see rattles," it’s because you are not seeing 95% of them.

Video of Preventing and treating a rattlesnake bite

Q: If someone accidentally gets bit, what should they do?

A: The best way to avoid getting bit is to watch where you put your feet. That’s how people get bit, by putting their hands or feet in a place without looking first.

If you do get bit, realize that you have lots of time and the bite is very rarely fatal. It’s a serious thing and you’ll need to seek immediate medical attention, but you don’t want to run, you don’t want to get your heart rate up. Just quickly but calmly make your way to a hospital by driving yourself or calling 911 and get yourself to a place where they can monitor you and give you an appropriate treatment.

Q: What kind of treatment might someone expect to receive if they are bitten?

A: So, one of the deals about getting bit by a rattlesnake — there’s not instant pain or changes in swelling. A lot of people might think, "I got bit, but it’s no big deal." Don’t wait it out. Assume that it’s a bad bite and that you need to get medical attention. The first thing they’ll do is put you on fluids because rattlesnake bites tend to cause peripheral vasodilation, or dilation of your vessels, and therefore your blood pressure crashes. They’ll also monitor you for potential use of antivenom, and usually they will give people antivenom. They’ll monitor how much to give you based on the response to clinical signs. Once you’re in the hospital, you’re in pretty good hands. The key is getting there quickly, but not doing it in a panic.

Q: What are some of the myths about how to treat a rattlesnake bite?

A: Some of the myths about what to do in the field when you first get a bite include cutting between the fang marks and sucking it out. That just causes additional injury and potential infection because that venom quickly dissipates through the tissue. You’re not going to pull out much venom.

Another myth is to apply a tourniquet. That doesn’t work well because one, you’ll cause additional damage to your (limb). This causes a lot of local damage and a lot of necrosis. The tissue will die. That might work well for other species of venomous snakes, but not for rattlesnakes. You just don’t want to get overly excited, especially getting your blood pressure up, or if running, your blood pressure might go down and then you could faint.

You have time. The only time you don't is if you are allergic to rattlesnake venom and usually only if you've been previously bitten by a rattlesnake. Remember, this is serious, but you have time to seek help, especially if you get help right away rather than waiting to see if it's an issue. Don’t do anything except get yourself medical attention.

Q: What should I do if my dog gets bit by a rattlesnake?

A: The best thing to do with dogs is to keep them on a leash because you can control where they go. The problem with dogs is they can smell a rattlesnake and they’re curious, and when they’re curious they put their nose right up to the snake and the snake doesn’t have a choice. This is a predator: They might think it’s a coyote or something that wants to eat them. So they will defend themselves.

Although dogs are relatively resistant to venom compared to humans, they tend to get bit in the nose or throat, and this can cause a lot of swelling and it can interfere with their ability to breathe. It’s also really important to get a dog to a veterinarian. They may use antivenom, but they’ll definitely monitor the animal’s ability to breathe.

Another option is aversion training. If you go hiking a lot, you can train a dog to avoid rattlesnakes. When they pick up a rattlesnake scent, you can use a shock collar with a little jolt and they’ll learn they don’t like it and don’t want to go anywhere near it. That is actually very effective.

Q: What does it look like if a rattlesnake is getting ready to strike?

A: Rattlesnakes have multiple levels of defense. The first is camouflage. They see you, they don’t move unless they think they’ve been detected. You can walk right by them, you can step right next to them, some people have stepped on them. They try not to move and there is no interaction.

The second thing is they try to get away. If they see you, they’ll slowly turn toward a bush or burrow and move along their own way. They want to avoid confrontation.

If they think they’re detected and can’t get away, they’re going to defend themselves. They will basically coil back their head, put it in a strike pose and they’ll start rattling their tail. That’s a warning. If they wanted to bite something, they don’t rattle their tail. If they see a mouse and want to eat it, they don’t rattle their tail. So when they’re rattling, that means they are doing you a favor. They are telling you to go away: "I don’t want this confrontation." It’s only if you continue to pursue that and approach, that’s when they’ll strike. They will release venom as a last option.

Keep the distance, but appreciate the experience you’re getting. These are important components of a natural ecosystem. They’re interesting to watch, and it will be a harmless interaction as long as you keep your distance.

Q: How important are rattlesnakes in the desert?

A: In deserts, we don’t have a lot of large predators, like mountain lions. (In) our deserts, in terms of biomass, rattlesnakes are the No. 1 predator out there. In order to balance the rodent population, these rattlesnakes play an important role in our ecosystem and so we need to understand that. If you’re out there, you’re in their world if you’re going for a hike, and their world is one that is balanced. We need to preserve them there and also understand the risk they pose and how to share that environment.

Don’t worry about going for a walk. It’s rare you’ll ever see a rattlesnake. It’s a privilege if you do. Remember, don’t freak out. Just enjoy the opportunity that’s been presented to you.

Q: Do you specifically study rattlesnakes, and if so, what is the focus of the research?

A: Rattlesnakes are one of the primary species we use to study responses to resource limitations. Rattlesnakes are vital components of the southwestern desert ecosystem in that they are the most abundant predator. Changes in the prevalence of rattlesnakes will impact rodent populations, which in turn can impact seed survival and therefore plant recruitment. Their abundance, as well as their hardiness, make them an excellent study system for our work. Of course, there is usually a negative to go with positives, and in this case, the obvious negative is the fact that they are venomous and thus require extreme caution when working with them.

Q: What kind of research do you do with reptiles?

A: My research focuses on how animals cope with long-term or seasonal limitations of critical resources such as energy and water. Resource limitations lead to both physiological and behavioral changes that enable survival until the resources become available again. Understanding these survival strategies is becoming increasingly important as it will aid us in evaluating the vulnerability of various species to anticipated human-induced changes in the environment associated with global climate change and urbanization.

Q: As the attending veterinarian at ASU, what is your role on campus in addition to teaching and research projects?

A: As the ASU attending veterinarian, I am responsible for assuring the welfare of all animals used in teaching and research, whether on campus or in the field. First, this entails reviewing all plans to use animals to make sure that they are meritorious and address the well-being of the animals. Second, we make sure all individuals involved in animal-related work are well-trained to perform their activities. And finally, we oversee a team of technicians that provides quality care to the animals used in teaching and research. It is in the best interest of the animals and the research to make sure that animals are well cared for and treated humanely. Fortunately, the researchers conducting the work share this opinion.

Top photo: The western diamondback rattlesnake has dark, diamond-shaped patterns along its back and a tail with black and white bands located just above the rattles. It has one dark line on each side of its face. It ranges in color from gray to pinkish to brown, depending on its habitat. It eats small mammals every two to three weeks. It's typically 3 to 5 feet long but has been known to grow as long as 7 feet. Photo by Sandra Keaton Leander/ASU