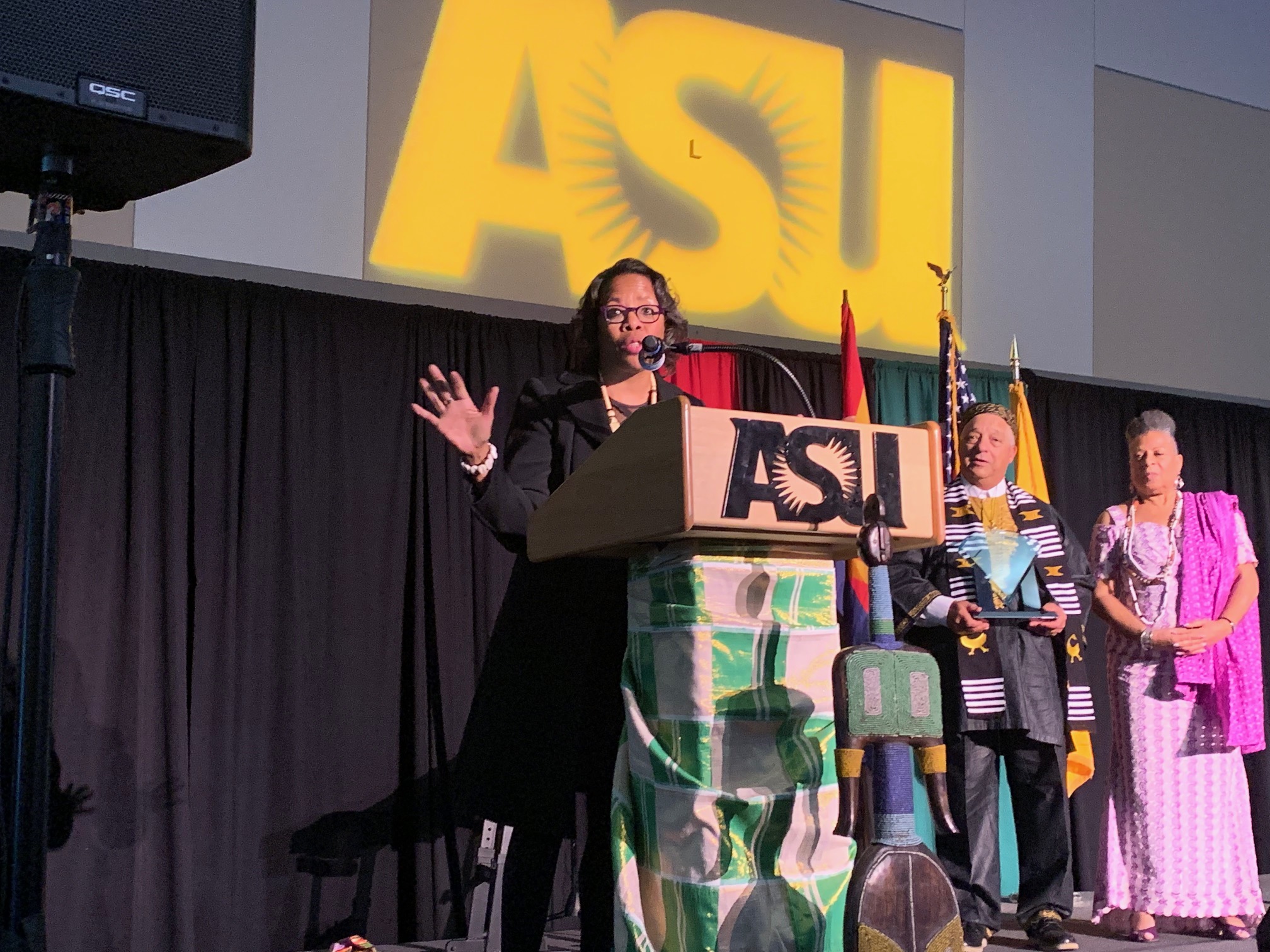 The ceremony recognizes individuals who have made significant contributions to the life and culture of African-Americans in the Phoenix metropolitan area. This year, Colleen Jennings-Roggensack, the university’s vice president for cultural affairs and executive director of ASU Gammage, was honored with an award, along with Student Pioneer Ayanna Shambe.

Jennings-Roggensack accepted the award on behalf of her parents, who she credits for her success and that of her siblings.

“They knew the world was a bigger place and that it belonged to us,” she said.

Sandrin remarked that it was an exciting time for ASU, having been named the most innovative university in the country for the fourth year in a row in 2018, and that the evening served as a reflection on the university’s mission to “assume fundamental responsibility for the … communities it serves.”

Charles St. Clair, an academic professional and fine arts specialist at New College, and Duku Anokye, an associate professor of Africana language, literature and culture in the School of Humanity Arts and Cultural Studies, served as emcees. Anokye kicked things off with an African libation ritual in which ancestors and deities are invoked as a tribute to their guidance of the living.

“We cannot work apart and think we can be successful,” Anokye said, calling on the crowd to unite through the call and response portion of the ritual.

Dinner was followed by a handful of select songs, including “What About Love” from "The Color Purple" and “Wheels of a Dream” from "Ragtime," a nod to Jennings-Roggensack’s instrumental role in bringing a great many Broadway musicals to ASU Gammage over her 26 years with the university.

“I’m not sure people even recognize how important you are to this Valley and this state,” said Jeffery Kennedy, assistant professor in the School of Humanities, Art and Cultural Studies who was on hand to serve as musical accompaniment to the evening’s singers.

“It’s not just the arts,” Jennings-Roggensack brings to the community, Kennedy continued, “it’s culture, too. And we are having experiences that change us because of that.” Shambe, a double major in women and gender studies, and biology, accepted the Student Pioneer Award by thanking friends and family for their support and encouragement. A student in Barrett, The Honors College, Shambe has served as president of the ASU Programming and Activities Board and spearheaded the revival of the Black Student Union.

Before Jennings-Roggensack took to the stage to accept her award, the audience was treated to a short documentary about her life and service.

Born an Air Force brat in a small town in Texas, she lived in 13 states and two foreign countries before she went off to college. At the age of 5, she saw her first opera, "Madame Butterfly," and in later years, remembers “second-acting” Broadway shows with her aunts in New York City.

As a child, Jennings-Roggensack said, her parents gave her and her siblings “three sacred texts” to live by: 1) Broaden your horizons. 2) Give back. 3) Get a job.

Though her first and lasting passion will always be dance, she eventually found her way into academia, taking on cultural programming for Colorado State University in 1977. After stints with Western States Arts Federation and Dartmouth College, she came to ASU in 1992 at the request of then-president Lattie Coor, who tasked her with reinvigorating the university’s lagging public-events program.

ASU Gammage has since flourished under Jennings-Roggensack, who has brought the likes of Maya Angelou, Boots Riley and the Dance Theatre of Harlem to perform there. She has also helmed several successful ventures, including K-12 art programs, community engagement initiatives and cultural revitalization projects.

At ASU, she serves as the chair of the MLK Committee and oversees Sun Devil Stadium 365, a universitywide initiative to reimagine and redesign the use of Sun Devil Stadium as a community union used 365 days a year by faculty, staff, students and the entire Arizona community for events and activities beyond athletics.

Jennings-Roggensack chairs the Broadway League's Diversity and Inclusion Committee and has also served on the National Council on the Arts and been involved with such groups as Arizonans for Cultural Development and the Tempe Convention and Visitors Bureau.

In November 2018 she was honored by Valley Leadership, a regional program designed to challenge local business and nonprofit leaders to make a difference in the community, with their Woman of the Year award for her impact on the lives of others.

At Saturday night’s ceremony, Jennings-Roggensack shared a story from her childhood about how her mother often read from “The Journal of Negro History” to her and her siblings at bedtime. Before turning out the light, she recalled, her mother would turn to her children, but she wouldn’t say “good night” or “I love you.”

“She would say, ‘Know your negro history,’” Jennings-Roggensack said, because she wanted them to know that they were “somebody” and that they came “from a long line of somebodies.”

“We didn’t forget our negro history,” she told the crowd. “And I am because you exist.”