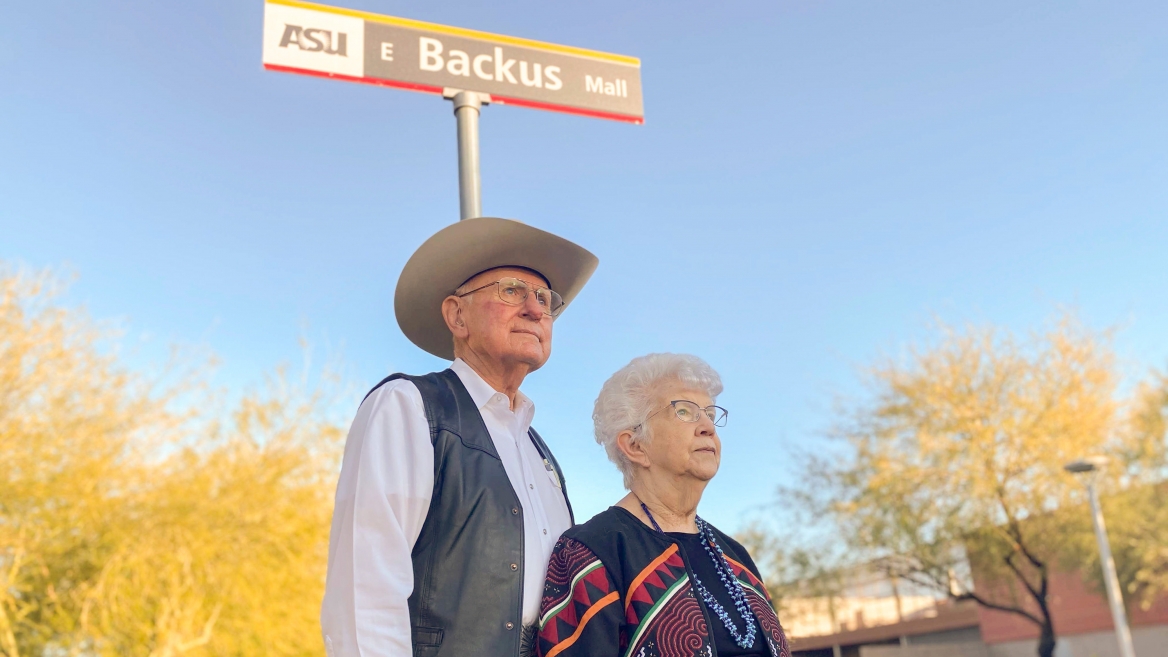 The Backus commitment: Endowment to boost success at Polytechnic campus

It will be 25 years ago this coming August when Chuck and Judy Backus, along with other founders, contributors and supporters, opened Arizona State University East, now known as the ASU Polytechnic campus. Beginning with fewer than 100 employees and about 1,000 students in eight degree programs, the founders could not have foreseen the profound impact the campus would eventually have on its faculty, students and the surrounding community.

Fast forward to 2021 and the Polytechnic campus is thriving. Nearly 20,000 faculty, staff, employees and students teach, conduct research, work, learn and study amid a desert arboretum situated in an up-and-coming East Valley technology hub. Every level of education is offered on campus, from elementary, high school and undergraduate studies to master’s degree and doctoral programs.

“We were lucky to have been a part of the founding group back in 1993,” Chuck Backus said. “It’s remarkable to see how the campus has grown and matured over the years into something we always hoped it would become.”

The campus now offers more than 100 degree programs within four colleges and schools, including The Polytechnic School, one of the six Ira A. Fulton Schools of Engineering at ASU. The students and faculty enjoy living, learning and working on a campus that feels off the beaten path yet completely engaged with the local community and industry.

“Although there have been many changes on the Polytechnic campus since it began operations, one feature has remained consistent: the amazing sense of community that remains strong because of Chuck’s leadership,” said Duane Roen, vice provost of the Polytechnic campus. “As I think about Chuck and Judy through the lens of ASU’s Charter, I can’t help but think of them as exemplifying its ideals in so much of what they have done.” 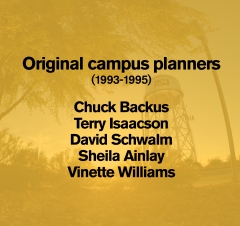 Many would say that the Backuses have been the Polytechnic campus’s biggest supporters since day one. Their commitment to education, community and inclusivity are cemented into the foundational layers of the campus.

“The contributors to this new endowment will be inclusive of all ASU East founders because opening the school was a collaborative effort,” Chuck Backus said. “We are also writing a book on the history of the Polytechnic campus set to launch this summer and all proceeds from that book will go to this endowment.”

History of the campus

Until 1993, the space now known as the Polytechnic campus was home to Williams Air Force Base.

Years before, in 1968, Chuck Backus joined ASU as a professor of engineering at the College of Engineering and Applied Sciences, eventually moving up the ranks in various roles before becoming the associate dean of research and interim dean of the college. He was later appointed provost of ASU East in 1996 and retired eight years later.

“In early 1992, I was appointed to a commission by the governor of Arizona to repurpose the Air Force base into something beneficial to the surrounding community,” he said. “Many ideas were considered: a large residential neighborhood and an international cargo airport among others. However, much of the East Valley seemed to be in favor of having an ASU presence in the East Valley, as well as a commercial airport.” 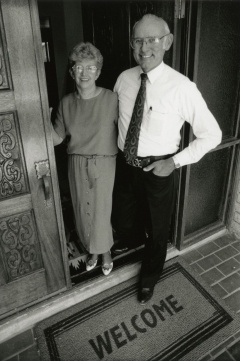 Chuck and Judy Backus pictured in 1996 at their Polytechnic campus home, in what is now graduate student housing. Photo courtesy of Vinette Williams

The Air Force accepted the recommendation and the conversion process started in 1993. With a very small budget, the committee hired architects and designers to redesign the base into a learning-friendly environment. Their goal was to create a desert oasis of abundant trees and vegetation, a distinctive landscape for which the campus is now known.

“It was apparent from the start — we were all going to roll up our sleeves and get to work,” said Anna Wales, former administrative assistant for ASU East and a current business relations coordinator for the Fulton Schools. “I remember needing to clean the Academic Center building prior to hosting one of the first Future Farmers of America competitions. Chuck and Judy were there, vacuuming and cleaning with the rest of us. The atmosphere they created was like a family.”

Terry Isaacson, a retired wing commander at Williams Air Force Base, was hired to join the ASU East planning group.

“He was very familiar with the buildings and land, so he was critical in helping us convert the space and eventually be in charge of business services,” Chuck Backus said. “He also co-authored our upcoming book.”

“Chuck and Judy Backus devoted a huge part of their lives to the creation of ASU East,” Isaacson said. “Chuck was the right person for the job at the right time.”

Chuck and Judy sold their home in Gilbert and moved into campus housing, becoming the first-ever campus residents, truly immersing themselves in the environment and fully committing themselves to the project.

“At the time, there was very little infrastructure in the area, so we felt like we were in the middle of nowhere,” Judy said. “We were afraid to let our grandchildren play outside because of the strong wildlife presence.”

As provost of the campus, Chuck began working with various academic programs to relocate to ASU East.

Chuck concentrated on academic programs that could grow and expand given the opportunities available at ASU East. The nutrition and the exercise and wellness programs, now part of the College of Health Solutions, relocated to ASU East and select education and nursing programs also moved to the campus.

“My goal was to make the Polytechnic campus friendly to all levels of college learners from undergraduates to doctorate students and bring in programs that were unique to the ASU East campus,” Chuck Backus said.

That goal inspired him to partner with Maricopa County Community Colleges to offer general undergraduate courses at locations near the Polytechnic campus, which reduced the need for students to commute to the Tempe campus to fulfill those course credits.

The campus continued to grow, and when Michael Crow first toured ASU East shortly after becoming ASU’s president, he commented that the campus could prosper as the ASU Polytechnic campus. The rest is history.

From humble beginnings to an educational powerhouse, the Polytechnic campus continues to grow, evolve and influence the standards of education across the state. The sense of community and inclusivity that Chuck and Judy Backus and the ASU East founders created continues to shape the campus today and paves the way for another 25 years of success.