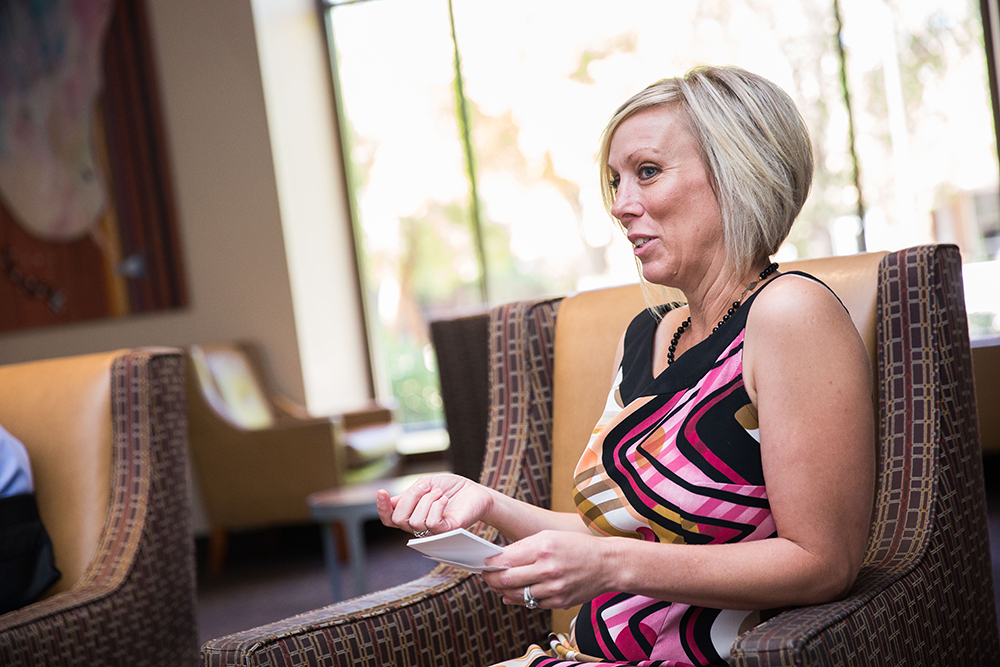 A new program at ASU has leveraged its unique position to create connections and opportunities for military-minded people to use their experiences to help each other develop.

Ellis has been contemplating a career in the military and wants advice from veterans.

Wofford has been adjusting to civilian life and wants a chance to mentor young women such as Ellis.

Sweatt, meanwhile, had a tough time after a career in the Marines and has been seeking to help veterans such as Wofford.

The trio and others like them have the opportunity to connect through the Veterans Fellowship Corps at ASU’s Public Service Academy, which seeks to get students and recently discharged veterans to ready for leadership positions in the civilian world.

The Public Service Academy, which launched in 2015, boasts that it’s the nation’s first undergraduate program “to integrate cross-sector and civilian-military experiences to develop collaborative leaders of character.”

The program’s first group, seven mentors and four Student Veteran Fellows, meets monthly. They also gather for a series of planned events, such as the Oct. 1 Leadership Lab at ASU’s Memorial Union in Tempe. They discussed their military experiences, transitioning back into civilian life and why they want to remain a part of the veteran community. “Transitioning from the Marines back into the real world was a nightmare,” said Sweatt, CEO of the Veterans Directory, an online database of veteran resources and products.

Sweatt said that after serving almost a decade in the Marines, she was harsh and intense. Her new boss, a Navy vet, encouraged her to go to college on the GI Bill to improve herself. She came out a new person — intent on helping others.

“My mentorship will not be about celebrating all of their victories,” Sweatt said. “I want them to know there are going to be bumps in the road, and it’s all about persevering.”

Wofford, 26, is enrolled at ASU’s W. P. Carey School of Business after serving more than six years in the Coast Guard. She’ll be mentoring young women in the Public Service Academy as well as receiving mentoring from an older veteran.

She chose to mentor because “I remember what it was like to be that age and not know what I wanted to do.”

Wofford said she was naïve when she joined at 18. She also said that although life in the military could be intense and unrelenting, she met some great people.

“When I was at my lowest and darkest times, there was always somebody who had your back,” Wofford said. “There’s people in the military who treat you like family. You strike these bonds with people that you never thought you would develop. You unite in good and bad times.”

That’s the kind of information that the 18-year-old Ellis wants to hear. Ellis, a psychology major, has been contemplating a career in the military or law enforcement.

“Being around veterans has been great for me because I get to hear all the good and bad things about the military,” Ellis said. “I’ve noticed military people have a passion to serve their country and fight for what they believe in. If they see injustice, they stand up and say something.

“Even if I don’t join the military, that’s the kind of person I want to be.”

Top photo: Program manager for Veteran and Community Outreach and Army veteran Michelle Bravo leads a book discussion at a meeting of the Veterans Fellowship Corps, a branch of the Public Service Academy. Photo by Deanna Dent/ASU Now