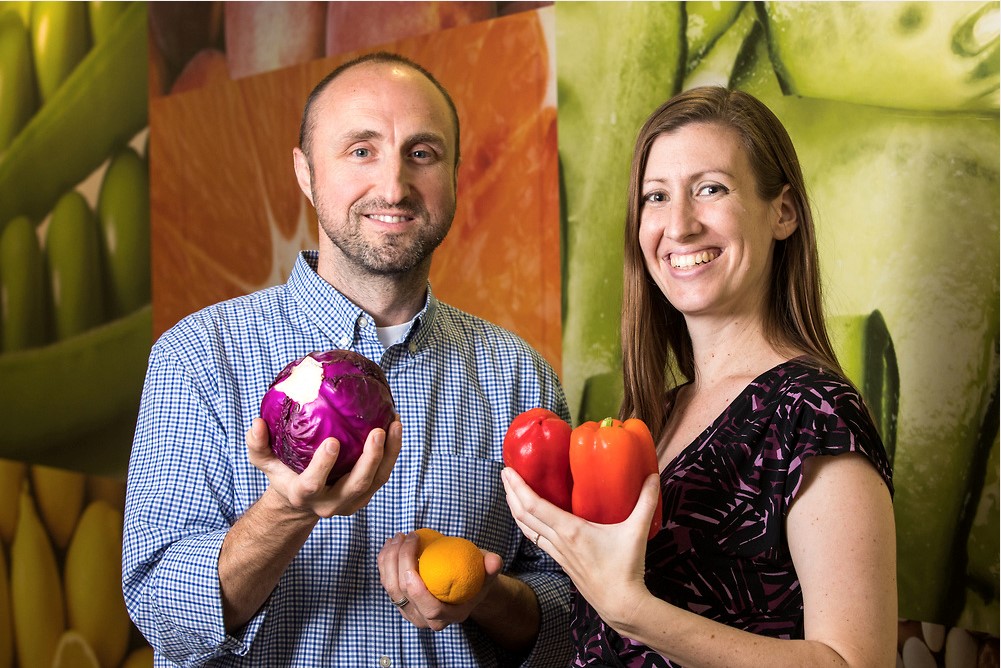 Adam Sandler’s satirical 1993 ode to that most crucial fixture of school cafeterias, the lunch lady — played to hilarious perfection by a hair-netted Chris Farley in his prime — did a splendid job of reminding us all of the less-than-savory offerings of our youthful noontime repast.

But chances are, nobody was actually eating those navy beans. Healthy food isn't always at the top of kids' minds.

The Centers for Disease Control and Prevention estimates that 93 percent of children don’t eat enough vegetables, and 60 percent of children don’t eat enough fruit to meet daily recommendations. That should be alarming to many, as a diet insufficient in fresh produce can lead to serious health complications later in life, such as cardiovascular disease, various cancers and type 2 diabetes, said Marc Adams, Arizona State University assistant professor of exercise science and health promotion.

“It’s important to provide opportunities for kids to develop healthy behaviors and eating habits early in life,” he said, “so they can persist throughout the lifespan to prevent [those kinds of diseases].”

Adams and Meg Bruening, fellow School of Nutrition and Health Promotion assistant professor of nutrition, just received a $2 million grant from the National Heart, Lung and Blood Institute to conduct a four-year study on the efficacy of salad bars in school lunchrooms.

“There are 31 million kids that participate in the national school lunch program, and if we can find ways to increase their fruits and vegetables that are effective, we need to be promoting those, and salad bars are one of the most heavily promoted ways of doing that — but we don’t know if they work,” Bruening said.

“Schools are investing a lot of money in this without much evidence, so we’re trying to provide a total picture of the evidence.”

The study will build on the duo’s previous research, published in 2016, which found that placing salad bars inside the lunch line in cafeterias, as opposed to outside of the line, resulted in four to five times higher consumption of fresh fruit and vegetables.

This latest study will involve 36 schools throughout Arizona. Each year for the first three years, Adams and Bruening will collect data from 12 schools: four elementary schools, four middle schools and four high schools. The final year will be used to sort and analyze the data.

They expect to see a difference in consumption based on age level, Bruening said, because previous research has shown that as children get older, they consume less fresh produce.

Each year of the study, the researchers and their team of roughly 30 ASU undergrads — from a variety of academic backgrounds, including nutrition, public health and medical studies — will measure fruit and vegetable consumption at the schools from the beginning of the school year in August to the end of the school year in May or June.

They will randomly select 100 students from each school and weigh their food trays immediately after exiting the lunch line with full trays of food, then again once the student has finished eating. Fruit and vegetables will be weighed separately from other foods to determine how much of them were consumed, as well as how much went to waste.

Similar studies have asked students how much they ate or otherwise estimated the figure, which is much less accurate than weighing the food trays, Adams said.

They’ll also be looking at cost, and whether a salad bar is economically logical for schools based on how it affects fresh produce consumption.

“We want to understand the whole picture behind having a salad bar,” Bruening said. “Are there cost differences in providing fruits and vegetables in a salad bar compared to fixed portions?”

It’ll be a while before they have definitive results, but they suspect salad bars will have a positive effect for a number of reasons.

“With salad bars, kids can pick what they like and select as much as they like,” Adams said. “That’s different than providing kids with fixed choices and fixed amounts that are pre-portioned, or even pre-plated.”

In previous research, Adams found that the more variety kids were offered, the more they ended up selecting and consuming.

“So salad bars are one way to offer increased variety,” he said.

Still, they want to make sure they’re providing evidence both for whether salad bars actually work, and if so, what are best practices.

Adams and Bruening are still looking for schools to participate in the study. Schools will receive a free salad bar, free high-quality marketing materials, general support from their research team, and a feedback report at the end of the year showing how much was consumed and wasted. They can be reached at Marc.Adams@asu.edu and Meg.Bruening@asu.edu.