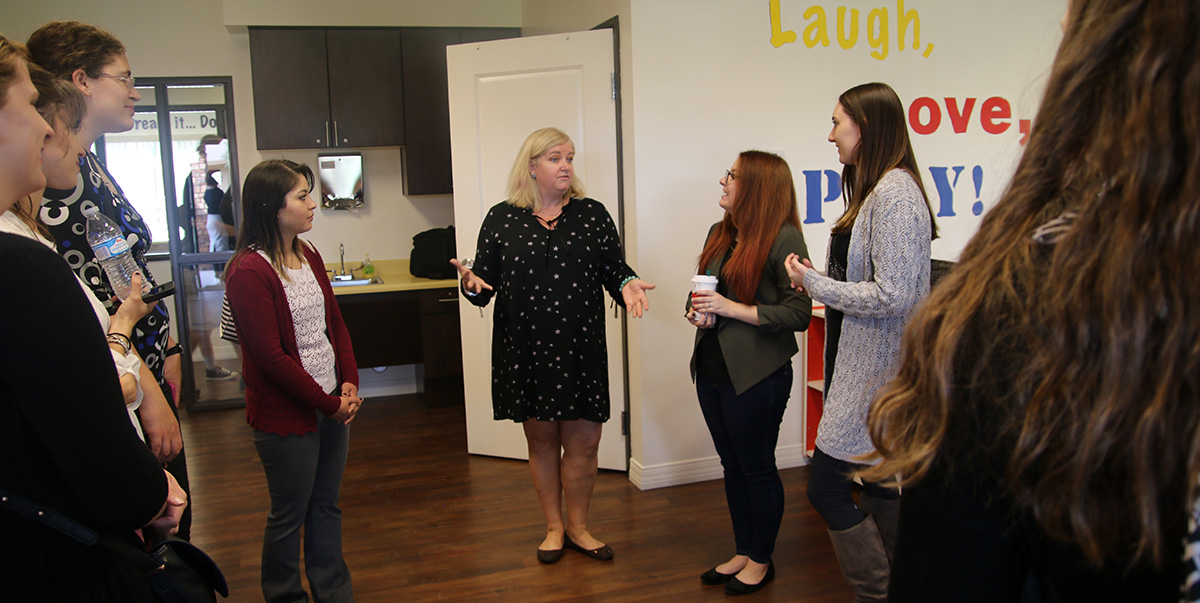 Arizona State University is a partner in one of the first facilities in the United States to offer long-term housing to victims of sex trafficking and their children. Called “Starfish Place,” the 15-unit apartment complex is in north Phoenix and offers furnished two- and three-bedroom units. Families could begin moving into the facility the second week of November.

On Nov. 3, Phoenix Mayor Greg Stanton welcomed about 100 people to the grand opening of the complex that was originally built in 2013 and refurbished by the city. Councilmembers Jim Waring and Debra Stark spoke at the event as did Jonathan Koppell, dean of the College of Public Service and Community Solutions. An actress involved in stopping sex abuse and a survivor of sex trafficking also talked at the grand opening.

“In Phoenix, we are sending a message that we will not tolerate an inherently harmful industry that deprives people in our own backyards of their basic human rights,” Stanton said. “And as a community we will embrace and help our most vulnerable.”

The apartment complex has a large grass area and features a community center with a full kitchen, offices and a learning area for kids.

Interns from the ASU School of Social Work will help staff the facility and work with tenants and their children. A $50,000 grant from the ASU President’s Office and the College of Public Service and Community Solutions will pay for the internships, therapeutic opportunities such as yoga and cooking classes and cover the costs of a program evaluation.

“We have people who are going to come in and teach children all the things they need to know to prevent them from being trafficked themselves,” said Dominique Roe-Sepowitz, an associate professor of social work and director of the Office of Sex Trafficking Intervention Research. “The funding will also pay for an evaluation to make sure that if we want to replicate this somewhere else, we can hand this to the city of Seattle, the city of Chicago and say ‘this is how we did it.’”

“This is a spectacular place and it's entirely appropriate because what this project, to me, is about is human potential,” Koppell said. “The individuals who will be living here are not merely trafficking survivors. They're individuals with tremendous potential.”

During the grand opening ceremony, Stanton thanked the many city of Phoenix agencies, local nonprofits and donors that helped make Starfish Place a reality. He also thanked a city of Phoenix human trafficking task force led by Waring and Cindy McCain.

“Without her efforts this wouldn't be possible,” said Waring, who represents northeast Phoenix. “But, it's not just here in Arizona where she (Cindy McCain) has made an impact, it’s international. And she deserves every round of applause she gets and every award she receives for her work on this issue.”

McCain and the McCain Institute worked with the ASU Office of Sex Trafficking Intervention Research on several studies that measured sex trafficking in Arizona and developed evidence-based training for law enforcement and professionals who work in child welfare, health care and education. Their findings helped guide new policies adopted by the city of Phoenix and the state of Arizona and informed a U.S. Senate subcommittee examining nationwide solutions to sex trafficking.

“We are all here because we understand that everyone has a responsibility to fight human trafficking,” Stanton said. “Not just law enforcement — although law enforcement is critically important. Not just city officials or government. Everyone in our community has to be part of the solution.”

Actress AnnaLynne McCord, who starred in the reboot of the TV show 90210, spoke at the grand opening. McCord is an ambassador for the No More anti-sexual assault campaign.

“I had my first experience with how amazing Phoenix as a city is in fighting human trafficking a couple of years ago when the Super Bowl was here and I am just completely blown away by the continued efforts,” McCord said. “I hope that our country listens and uses this trend in other cities.”

Sex-trafficking survivor Lois Lucas told the grand opening audience that had such a facility existed when she needed help, her story might be different. Her son was taken from her and put up for adoption because she couldn’t escape prostitution. She finally got the help she needed and now helps other women recover from their trauma and abuse.

“There are a lot of survivors with children ready to get here to get the help they need to change their lives,” Lucas said. “There's just no place to go before today.

“So thank you city Phoenix and everyone involved for creating this special place for sex-trafficking survivors who don't get to just survive. They get to thrive!”

Top photo: Dominique Roe-Sepowitz, an associate professor of social work and director of the Office of Sex Trafficking Intervention Research, talks to ASU students who work on human trafficking issues.

Correction: An earlier version of this story stated that Starfish Place is the nation's first facility to offer long-term housing to victims of sex trafficking. A nonprofit in Minneapolis, Breaking Free, established the nation’s first permanent housing program for victims of prostitution and sex trafficking in 2002.