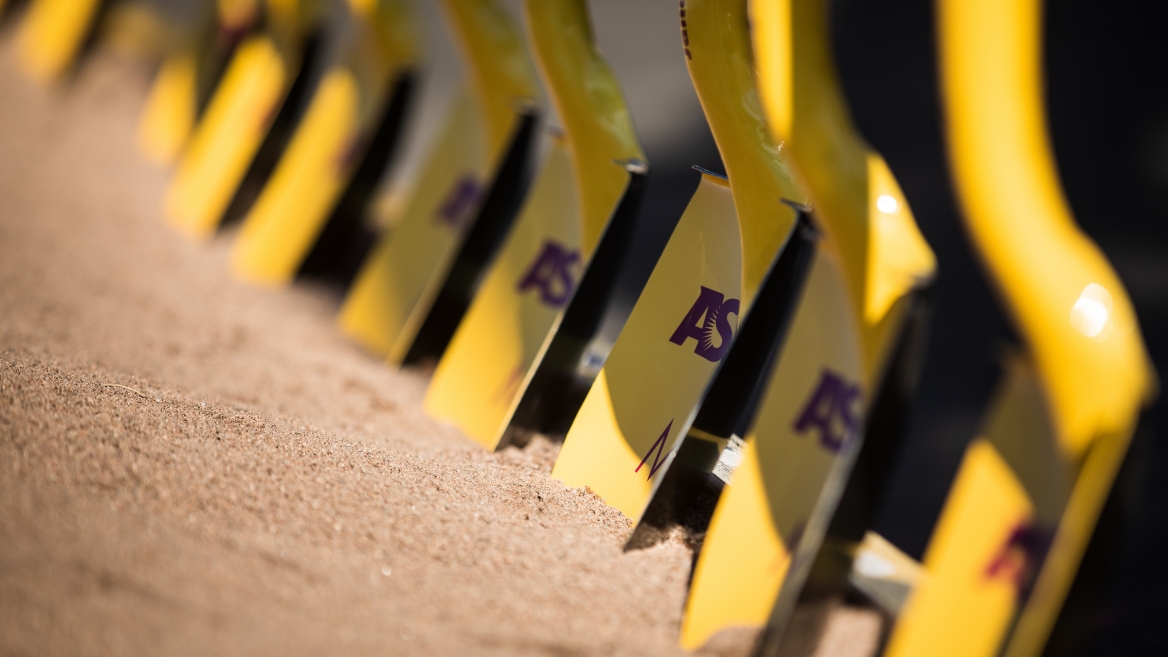 Arizona State University broke ground Friday on ASU at Mesa City Center, a state-of-the-art project that will jump-start the revitalization of downtown Mesa and train students in one of the biggest industries in the United States: media production.

The three-story academic building, which is scheduled to open in spring 2022, will offer programs in the Herberger Institute for Design and the Arts in digital and sensory technology, experiential design, gaming, media arts, film production, and entrepreneurial development and support.

“We’ve been waiting for our future for a very long time,” said Jen Duff, a Mesa City Council member who grew up in Mesa and now represents the downtown area. She spoke at a groundbreaking ceremony held Friday at the site, at the northwest corner of Pepper Place and Centennial Way.

“Our glory days of downtown Mesa are returning but in a new way that will redefine our city in the next hundred years,” she said.

The project is a unique partnership between ASU and the city of Mesa. Of the $73.5 million budget, $63.5 million will come from the city and $10 million from ASU, which also will contribute a minimum of $10 million toward the interior construction. ASU also will pay all operations and maintenance costs, estimated at $1.3 million annually.

ASU at Mesa City Center, which will host about 800 students, will include a large exhibition gallery, screening theaters, production studios, a fabrication lab and a cafe that will be open to the public. The upper floors will include classrooms and spaces for collaborations with community and industry.

ASU President Michael Crow said the project is a symbol of ASU’s commitment to improving the communities it serves.

“Long ago we decided to not build a university that was a place that people went to that had brick walls covered in ivy and that you had to be a super genius or super rich to somehow get into,” he said.

“And so we pledged to build what we call one university in many places. A university that is connected, engaged and working with leaders around Arizona and in the Valley in a way in which we could build a responsive and adaptive university.

“Mesa wants to build a new future on a tremendously successful past, and it wants to move forward into the new economy and participate in richer and deeper ways.”

Crow said the project might not seem logical at first.

“Why would a city be investing with a university partner to create a facility equal to the fabulous digital-creativity facilities in Singapore or London or Brooklyn or Hong Kong?” he asked.

“They do it because it’s like an airport or a canal. It’s a public investment in infrastructure that allows us to then start the process of building a new and expanded economy.”

Crow called ASU at Mesa City Center an “act of wisdom” as well as faith in ASU’s commitment.

“This project, and our project on the Polytechnic campus, is us in our permanent relationship with Mesa,” he said.

The building will be one of the finest media-production facilities in the world, said Steven Tepper, dean of the Herberger Institute for Design and the Arts.

“There will be students making films, making video games, producing television and all kinds of immersive-media experiences,” he said.

But the goal is to include the Mesa community in the programming.

“We want this facility to be more than a black box where people come to make cool things in windowless rooms,” he said. “Instead, this will be an inviting place for the public to come to be inspired, entertained and informed.”

“We can create environments,” he said. “In this facility, you can explore worlds deep beneath the sea. You can explore caves in South Africa. You can walk through a refugee camp with the perspective of a 10-year-old Syrian girl. You can stand on a stage with the conductor in a Vienna concert hall.”

In addition, Tepper said the facility taps into one the most lucrative sectors in the economy: the $50 billion film industry, whose workforce grew by 25 percent in the past five years.

“The U.S. exports more media and entertainment than automobiles and pharmaceuticals,” he said, adding that the Mesa center will have direct access to the entertainment industry through ASU’s new facility in Los Angeles.

“This center will help train a next-generation creative workforce for our state, helping to keep jobs and our kids at home, where they can create and innovate a new future for all of us.”

“One of the things we’re hoping to see come out of this project are the startup companies and the spinouts that emanate from the work that will be done here,” she said.

Mesa Mayor John Giles said the partnership with ASU is the driving force behind the city’s goal of increasing college degree attainment and of upgrading the area.

“We have invested in our downtown for many years, from streetscapes to arts centers to light rails to new building facades, and those have created the borders of a very beautiful puzzle,” he said.

Giles expects the media-production technologies at ASU at Mesa City Center to attract entrepreneurs and developers to the downtown.

“ASU will be training the workforce of the future right here in Mesa, and the business world has its eyes on us,” he said.

Top photo: Shovels are lined up for the groundbreaking of the new ASU at Mesa City Center in downtown Mesa on Friday. Photo by Charlie Leight/ASU Now