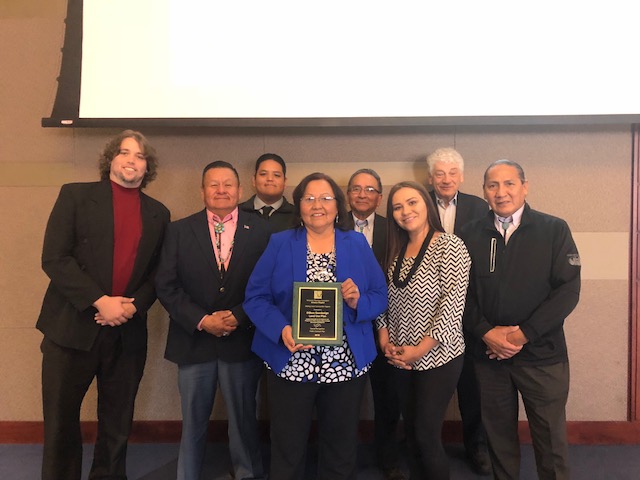 The Arizona Chapter of the American Planning Association recently held their annual conference, during which members from Arizona State University’s School of Geographical Sciences and Urban Planning were recognized for their project with the Navajo Nation’s Dilkon Chapter.

David Pijawka, professor of planning and senior sustainability scientist with the Julie Ann Wrigley Global Institute of Sustainability, has a long history of working with indigenous communities to ensure Native culture, customs and traditions are considered in community planning. Pijawka and Jonathan Davis, a geography PhD student, recently worked alongside the Dilkon Chapter to successfully complete a community land-use plan. It is for this outstanding work that Pijawka, Davis and the Dilkon chapter were recognized on Nov. 8 for special recognition for a public outreach plan.

The Dilkon Chapter of the Navajo Nation, located in the northeastern region of Arizona, is an active and engaged community that desired to compete for funding for further economic, housing and public service development within their community. In order to better compete for funding for these initiatives, the Dilkon Chapter needed to update their community land-use plan, as dictated by the Navajo Nation. Teaming up with Pijawka and Davis, the chapter began to utilize a new approach help create their plan

In February 2017, a community-based land use plan was created through the use of "geodesign."

Geodesign is primarily guided by the principle that land-use planning is complex, therefore to effectively design a resilient and sustainable community or place, it requires a collaborative approach between GIS (geographic information systems) experts, planning professionals, geographic scientists, community members and other stakeholders such as environmental, development and housing experts.

“Geodesign leading to a land-use plan incorporates community participation and visioning of a different and viable future based on community-shared goals and needs that leads to consensus on the type of land uses, their location and connections,” Pijawka explained. “We found that the idea of a community working together to reach a consensus of a future connected well with indigenous approaches to planning communities. The exchange of ideas and knowledge, through the use of computer GIS systems for communicating among community groups was original and innovative.”

The Dilkon Chapter’s project is the first known application of geodesign as a planning framework in an American Indian community.

In order to complete this effort, the Dilkon Chapter, Pijawka and Davis, along with members from the Office of Navajo Government Development, completed a two-day long workshop where eight different data development groups were created based on their area of interest and expertise, including economic development, public services, conservation (both cultural and environmental), transportation, infrastructure, grazing and housing. During the workshop community members were able to consult with experts and design land-use designations using the land suitability maps, their local knowledge and their cultural and traditional sensibilities.

As soon as these designs were contributed, the ideas were immediately shared with the other data development groups through the geodesign software. At the end of the first day, eight unique land-use plans had been developed from over 100 potential land-use designations contributed by Dilkon community members. The group then worked to prioritize and combine the plans until they were ultimately able to complete one final land-use plan that incorporated community feedback and that was built through consensus and compromise.

The final land-use plan incorporated a cultural conservation map with an explanation from Dilkon Chapter elders on why certain areas in the community are culturally and traditionally important, identification of recreation areas within the town that could serve as a community area to interact with nature and designation of a potential solar field to reduce energy costs for the community. A transportation plan was also created, designating five miles of road for paving, five miles of road for sidewalk and three additional crosswalks.

One of the most important aspects of the geodesign workshop is that planners from Arizona State University and the Office of Navajo Government development were able to provide their expertise to the community when called upon, but final decisions on land designations were up to the community members. The effort also incorporated planners from the Navajo Nation, promoted public participation within the Dilkon Chapter and used Navajo GIS analysts as technical assistants. With the successful results from this exercise, it is now believed that the geodesign planning framework can serve as a future planning model for American Indian communities by leveraging Western planning with a strong influence of community values and traditions.

The plan from the Dilkon Chapter has now been submitted to the Navajo Nation Office of Government Development for approval and marks an important milestone in a budding relationship.

“This is an important partnership that places ASU in the center of important community work with American Indian communities,” Pijawka said. “It demonstrates a successful and innovative approach to community development through the use of information technology, spatial analysis and community engagement.”