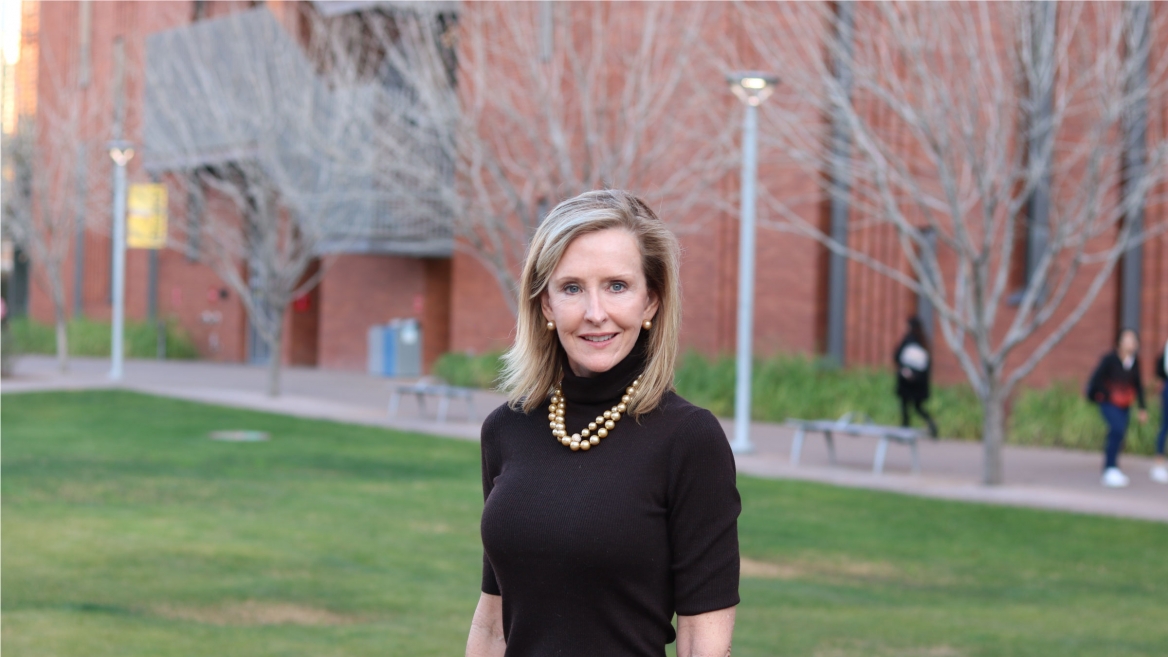 ASU alumna lets people be a part of the solution

Arizona State University alumna Karrin Taylor Robson believes one should always be prepared for when opportunity or responsibility knocks on the door.

That belief was put to the test when she was ready to graduate with a BA in history in 1987 and her friends talked her into running for student body president. The catch was only students can serve, so she decided to stay another year in college.

Choosing political science as the major to add was an easy call. Taylor Robson, who grew up in Mesa, Arizona, had a civically engaged family. Her father was first on the board of adjustments and then was in the state legislature, where he served for 16 years.

Taylor Robson would follow up her undergraduate career with a JD in law from ASU in 1994. She would go on to work in a small law firm where she practiced in the area of land use, development and zoning laws.

When she was in law school, Taylor Robson saw her peers bring their education and life experiences to the law they chose to practice. For her, land use was a natural fit because it is not only local but political.

“I always told people that land use law is really 60% politics and 40% law,” shared Taylor Robson. “It was a way for me to take my education in political science and put it to practice in the legal field.”

After serving as an executive vice president for a local real estate company for more than 10 years, Taylor Robson was ready for a career change. In 2016 she founded Arizona Strategies, a land use strategy team that specializes in adding value to clients’ real estate.

This transition has opened new doors for Taylor Robson. In her legal career, she was always working on the front end of projects before handing them off to developers. In her new role, she is able to pursue being a developer herself and learning all that that entails.

“First of January we started turning dirt on a project in downtown Mesa, so I now have my own real estate development project,” she said. “I hope it is the first of many.”

In June of 2017, Arizona Gov. Doug Ducey appointed Taylor Robson to the Arizona Board of Regents, which is responsible for the governance of the state’s three public universities. At the time, no one on the board specialized in real estate, though the three universities own a substantial amount of land.

Taylor Robson shared that she has focused on adding her expertise where she can to add value, and that the knowledge on the board — along with the matters that they must deal with — are astonishing.

During her time on the board, Taylor Robson has focused on civic engagement. That included the inaugural Regents’ Cup in 2019, which is an annual debate competition between Arizona’s three universities designed to encourage mutual respect and civil discourse. The event aims to celebrate free speech while elevating respectful and effective communication.

“If I walked away today, the Regents’ Cup would be the thing that I would want to be remembered for.”

For all of these accomplishments and many more, Taylor Robson will be honored at Founders’ Day on Feb. 25 with the Alumni Achievement Award.

“The people who have received this award in the past I hold in the highest esteem,” shared Taylor Robson. “The professional accomplishments and personal stories are phenomenal, so to be in that group of people is humbling.”

This recognition has created a chance for Taylor Robson to reflect on her time at ASU and the impact it had on her career. She shared that many of her friends from college are now leaders in the community with whom she still works today.

During her first year at ASU, Taylor Robson took a leadership course where her main takeaway was that “people support what they help create.” This idea has fueled her career. According to Taylor Robson, the more you allow stakeholders into your process, the better chance they have at becoming your biggest advocates.

“I allow people to be part of the solution and that was something I learned here,” she said. “It was one of the most important things I learned here. ASU definitely set me on my path.”