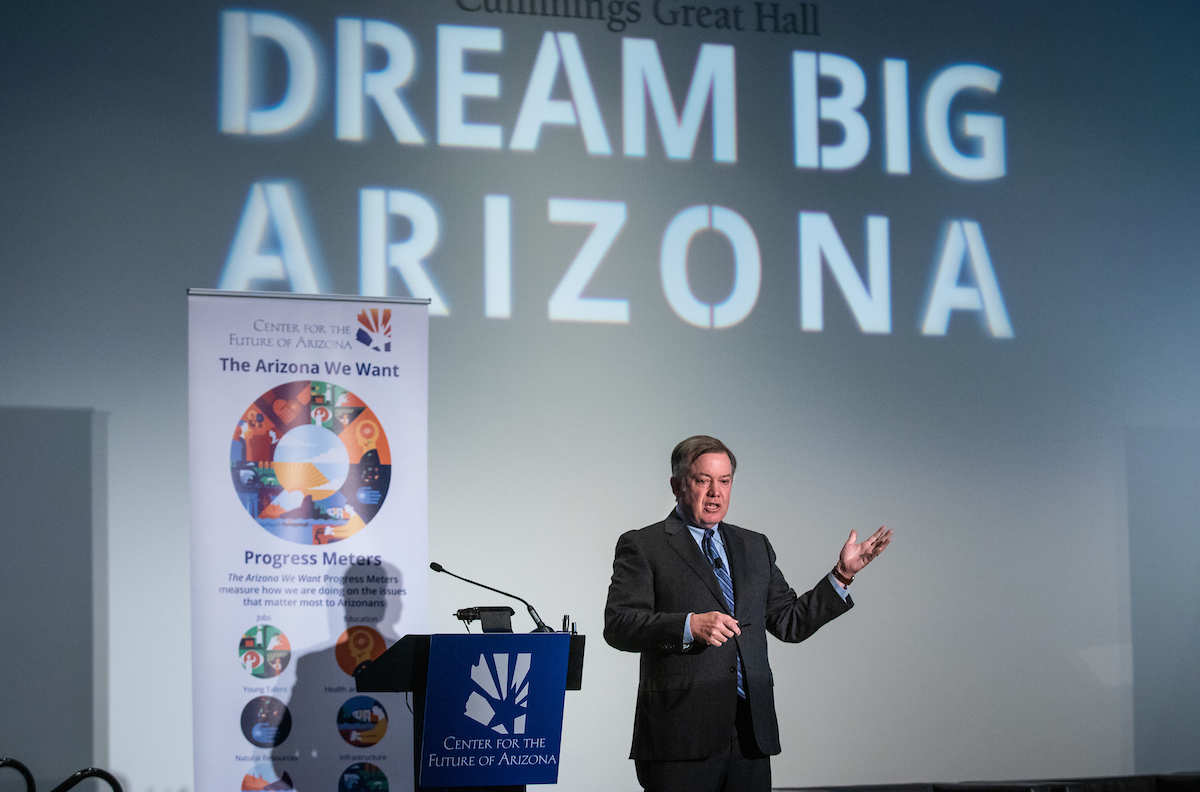 'Arizona: A Unique Laboratory of Democracy'

Arizona now is a place for big dreams and aspirations, but we didn’t get here by wishing it, said Arizona State University President Michael M. Crow to a group of Valley leaders on Thursday.

“We didn’t design it. We were blessed with its inheritance.”

The event, which took place at the Phoenix Art Museum, also included a panel discussion, "Dream Big: Breakthrough Opportunities for Arizona's Future" with a handful of community leaders from a variety of sectors.

Crow’s keynote speech, “Arizona: A Unique Laboratory of Democracy,” was part of the Center for the Future of Arizona’s unveiling of a set of tools and data sources that communities can use as frameworks for discussion, problem solving and long-term planning for success.

These tools — called the Arizona Progress Meters — are part of an expanded portfolio of "The Arizona We Want," an in-depth study started 15 years ago that brings Arizonans together to build a brighter future for the state.

The eight distinct meters focus on jobs, education, young talent, health and well-being, natural resources, infrastructure, civic participation and connected communities. They also reflect the shared values and priorities of Arizonans while providing data to help the state achieve success in areas most important to communities.

That’s important because big ideas are needed to power successful tomorrows, said Sybil Francis, the president and CEO of Center for the Future of Arizona.

“I fell in love with Arizona the day I moved here with my husband from New York in 2002,” said Francis, who is married to Crow. “Our most ambitious dream, our big dream, is to help focus and steer discussion and action around issues that matter most to Arizonans, and to help identify and support that change that must take place to help them achieve their dreams.”

Francis added that the Arizona Progress Meters are designed to measure how the state is doing relative to the priority areas identified by Arizonans across the state.

In 2009, the Center for the Future of Arizona identified the things that matter most to Arizonans through its study, "The Arizona We Want." It included the shared values and priorities of Arizonans as they seek to improve their lives and the quality of life available to them. It also framed the important issues that leaders should think about as they work to advance prosperity and opportunity for Arizonans.

“I’m a big believer in what gets measured gets moved … it’s what gets done,” said Arizona Gov. Doug Ducey, who also spoke at the Thursday event. “We embrace these progress meters in the governor’s office.”

Ducey called the Arizona Progress Meters a “powerful tool” that spotlights where Arizona succeeds, where it falls short, and what can be achieved in the years ahead.

“And that’s what today is all about,” Ducey said. “Coming together to ensure our state continues to thrive for decades into the future.”

Francis said the new metrics were patterned after the Education Progress Meter, which was launched in 2016. Since then, it has been adopted by more than 40 cities, towns and counties throughout the state and is supported by the Arizona governor’s office.

“The Education Progress Meter is a foundational success story of how Arizonans can leverage data while working together to address big issues facing our state and its important systems,” Francis said. “It is being used by government agencies, policymakers, cities, towns and communities across the state, among others, to inform and drive actions to improve educational outcomes.”

She added the newly introduced Arizona Progress Meters intend to replicate that success while addressing other systemic issues of critical importance to the state and prompt Arizona communities to engage with each other to solve problems.

There is still much work to be done, Francis said. She said through “The Arizona We Want” Community Conversation series, the Center for the Future of Arizona will engage with partners and communities across the state to spark discussions and introduce the Arizona Progress Meters as tools to support data-driven dialogue and action.

“We will transmit this city, this democracy, not only best, but greater and better and more beautiful than it was transmitted to us, and for everyone that follows,” Crow said.

Top photo: ASU President Michael Crow talks about the state's foundation at the Center for the Future of Arizona's Dream Big Arizona breakfast on Feb. 28 at the Phoenix Art Museum. Photo by Charlie Leight/ASU Now