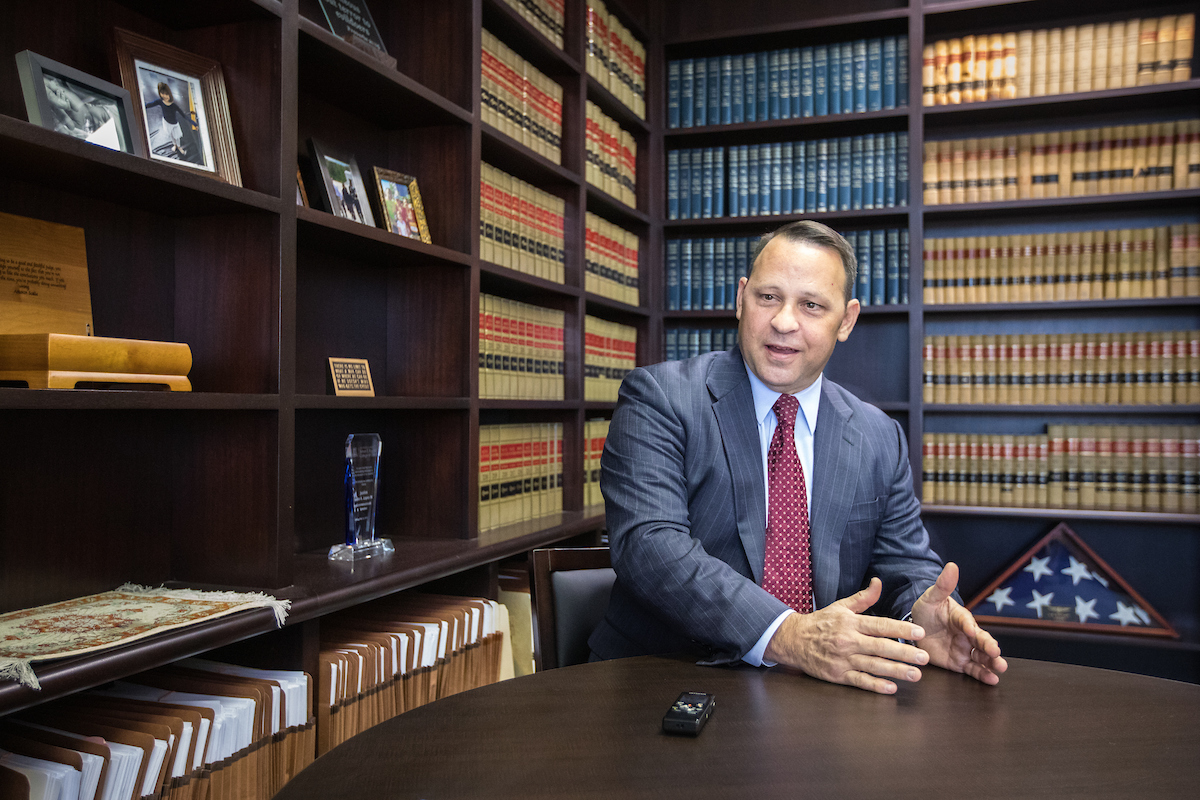 Arizona Supreme Court Justice John R. Lopez believes college students interested in a law career don’t get enough face time with the judiciary and has availed himself through a new course at Arizona State University.

“I think it’s important for people in positions of public trust, especially the judiciary, to retain a connection with the community to reinforce the fact that we’re just like other members of the community we serve," Lopez said. "This is especially important for our younger citizens, like undergraduate students, to understand."

“Debating the Constitution” will be co-taught by Lopez and history Professor Donald T. Critchlow, the Katzin Family Professor at ASU. The class, which is part of ASU’s School of Historical, Philosophical and Religious Studies curriculum, starts this spring.

The course addresses the topics of major Supreme Court decisions including free speech, slavery, racial integration, presidential power and campaign financing. The course will combine lectures by Lopez and discussion led by Critchlow.

Lopez, who is an ASU law alum from 1998, was appointed to the Arizona Supreme Court in January 2017. Previously, he worked in the U.S. attorney’s office and served in Iraq as legal adviser with the Regime Crimes Liaison Office, the Department of Justice group tasked with assisting the Iraqi government with the prosecution of Saddam Hussein and his top officials for war crimes and crimes against humanity.

ASU Now spoke with Lopez a few weeks before he enters the classroom.

Question: Given your busy schedule and that this is your second year on the bench, why did you agree to take on this class?

Answer: I have guest lectured several times over the past few years in Professor Critchlow’s classes, and he suggested that we co-teach a class. I quickly decided it was worth the extra effort. If he had asked me to do this in my first year, however, I might have balked at the idea. But now that I’ve become accustomed to the workflow of my job on the bench, I decided that it was possible to take on the class.

Q: I’m not sure the general public understands how much work and preparation goes into teaching a course. Your thoughts?

A: I agree with your premise. Although I have lectured at many seminars during my career, I have never taught an academic course. I know how much work goes into preparing for a single lecture, so I have a sense of the work involved in teaching a course. Teaching the course with Professor Donald Critchlow will, however, make the task more manageable.

Q: I’ve heard many law students say they don’t have much access to acting judges, much less a justice. What is your hope to show them in their interactions with you?

A: A couple of points about my own experiences: I was fortunate to have worked as an intern on Capitol Hill as an undergraduate student and to have served as a judicial extern for a federal judge while in law school. I found that interacting with individuals in positions of public trust and responsibility demystified the political and legal processes and made a career in public service seem more attainable. It reinforced the notion that a judge, for example, is just a regular person, a member of the community. Demystifying the process, for me, eliminated the gulf between government and the citizenry. After all, we are, and must continue to be, inseparable.

My hope is to help demystify the process for students, particularly those who have never met an elected official or a judge, and to help them understand that we’re no different than they are. If that inspires them to become more engaged in the process or motivates them to pursue positions of public trust, then it makes it all worthwhile. Q: As you mentioned before, the class will be co-taught by ASU Professor Donald T. Critchlow. Why did you choose this format?

A: First, I’ve really enjoyed guest lecturing in Professor Critchlow’s classes. Second, when he approached me about co-teaching the course, he suggested the format. We agreed that teaching the course material from the complementary perspectives of a historian and a judge/lawyer would enrich the class. His history background will provide context for my focus on the Supreme Court’s jurisprudence and should offer the students greater understanding of the court’s seminal cases and their lasting effect on our society.

Q: What do you enjoy most about the law, be it what you have learned or what you want to convey to students?

A: The most powerful things that drew me to the law are twofold: One is the nature of the law. It’s a perfect blend of art and science. The rigorous, methodical approach to legal reasoning really appealed to me. It suggests that there are definitive answers to very complex issues. The other appeal is the centrality of the rule of law to American society. The rule of law defines and distinguishes our society. It is at the center of government, the economy and our public discourse. I find that fascinating as well.

Q: You’ll be coming up on your second year on the bench in January. Tell us about your learning curve, the aspects of the job and some of the things that have come as a surprise to you.

A: The nature of the work was not a surprise to me. I have worked as a trial and appellate lawyer for many years, and I served as a law clerk on the Arizona Supreme Court, so there was nothing truly mysterious about the nature of the job. What surprised me the most — and I was pleasantly surprised — was the collaborative way the court, with seven justices, arrived at decisions in cases, and that each justice retained the prerogative to revisit an initial vote after oral argument in a close case. It was a tremendous relief for me that, indeed, when the court decides cases there is still room for a justice to be uncertain of the correct resolution, even in deliberations, and that it was acceptable, if necessary, to go back and do more research. Or to have additional conversations with my colleagues. It reinforced what I always believed, which was that this is a very thoughtful process and that members of the court always remain open to persuasion by their colleagues.

Q: Does that mean you are also open to persuasion on a case where you had made up your mind?

A: Indeed. Every one of my colleagues remains open to persuasion and when a justice says that, they mean it. We want to get it right. If you don’t have an open mind, you risk reaching incorrect conclusions. You should never ignore a person who is pointing out flaws in your reasoning. In some cases, where reasonable minds can differ, we simply agree to disagree. And when we disagree, we do so respectfully.

Q: So what are some of the big issues you anticipate will be coming your way in the future?

A: There are several broad issues percolating in the federal courts that will likely also present interesting legal issues for us in the future. For example, we will likely see cases involving religious liberty, the role of the administrative state, and the many issues that follow burgeoning communications and information storage technologies, including privacy implications, Fourth Amendment challenges, and litigation parties’ discovery obligations.